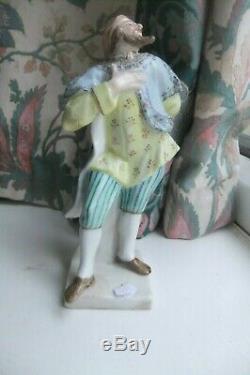 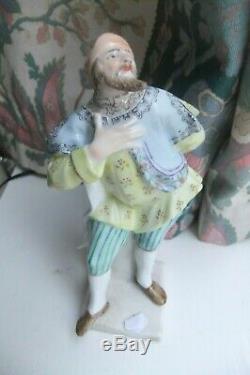 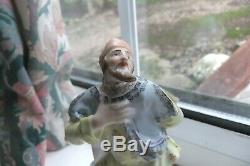 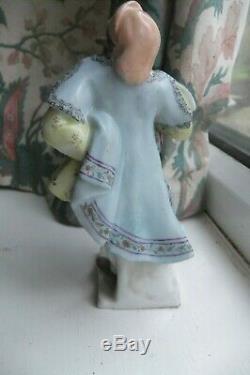 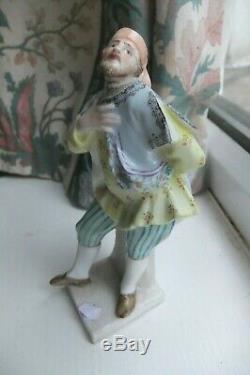 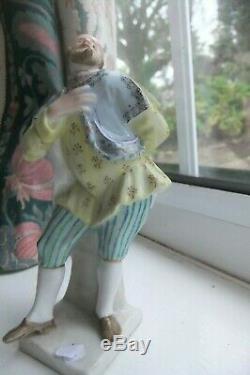 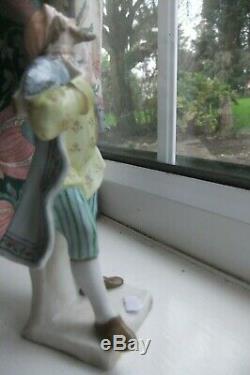 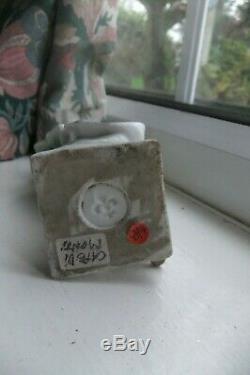 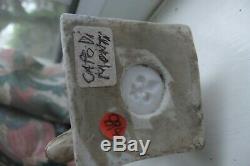 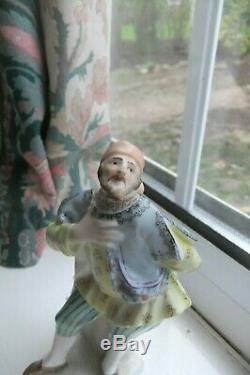 A VERY FINE and EXTREMELY RARE Capo Di Monte figure by GIUSEPPE GRICCI, C. I think he is the character'Pantaloon'. He is certainly from the Italian Commedia D'Elle Arte. See info below, where everything they say applies to this figure for Gricci. Size, creamy white paste, style and even the shape of the base. Even his head is relatively small in comparison to his body. These early Capo figures by Gricci are extremely rare, because if we are lucky, we might see a Meissen Commedia D'Elle Arte figure by Kandler rarely. It is so much rarer to see a Capo Gricci one, and also one that is marked, as opposed to most early pieces unmarked.

This piece comes from my personal collection, and is fresh to the market from over 20 years ago. For which even then I paid a lot, because I rated it so high. I understand this is hard believe, but it is how I bought it originally, and I have been over and over it, looking very closely and testing.

Incised/impressed fleur-de-lys in a circle as photo. Chief modeler at the original Capodimonte Royal Factory between 1743 and 1759. Gricci, a Florence-trained sculptor, was the chief modeler for the Capodimonte Royal Factory. Until its closure in 1759. When King Charles VII of Naples became King Charles of Spain and moved Capodimonte production to Buen Retiro, (near Madrid), Gricci moved with it and became the chief modeller of the Spanish factory until his death in 1770.

By 1755 factory production was at a point where the chief modeller had perhaps as many as six other modellers working under him. Although many of the other early Capodimonte pieces were unmarked Gricci did use the incised/impressed fleur-de-lys in a circle mark on most of his figurines and his distinctive style is easily recognized. Because he was using a soft-paste porcelain formula his figurines were noted for their creamy white appearance. He worked in miniatures, usually under 6 inches tall (but there are some larger). Figurine bases were rocky or angular, not smooth or rounded as in later, (1771+), Capodimonte figurines.

Figurine heads were typically disproportionally small relative to body size. His figures were modeled after subjects from the Naples area; street traders, peasants, and harlequin characters from the commedia dellarte. He is also credited with designing a popular snuff-box molded in relief with shells and marine life, and the creation of spectacular porcelain cabinets made with interlocking plates of porcelain decorated with chinoiseries.

(Chinese artistic influences fanciful, ornate and idyllic imagery) One, the Salottino di Porcellana, while in Naples, and another, the Gabinete de la Porcelana, while in Buen Retiro, Spain. Gricci also made the porcelains used to create the Porcelain Drawing Room at the Royal Palace at Portici. (above) The room decorations were a combination of the same type of tiles he used to create the porcelain cabinets mentioned above with the same chinoiseries , and decorative floral, vines, and sconce pieces. It also includes Capodimonte-made chandeliers of course. This room was later moved to the National Galleries at Capodimonte in 1866.

He created a similar rooms for the Kings two palaces in Spain. It is generally accepted that The Mourning Virgin, (The Mater Dolorosa). Figurine is the only remaining Gricci piece that has his signature. The item "VERY FINE EXTREMELY RARE Capo Di Monte figure by GIUSEPPE GRICCI, C. Meissen" is in sale since Sunday, January 5, 2020.

This item is in the category "Pottery, Porcelain & Glass\Porcelain/China\Meissen". The seller is "superharlequin" and is located in Norwich. This item can be shipped worldwide.