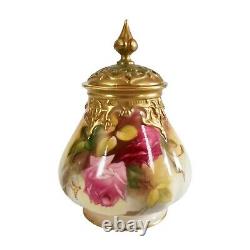 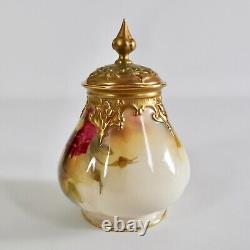 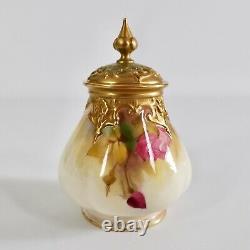 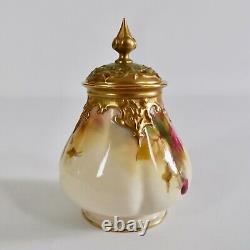 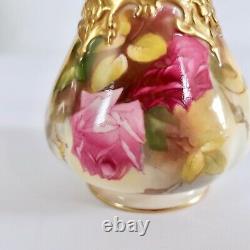 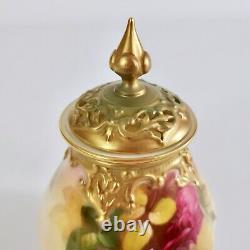 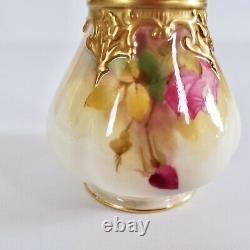 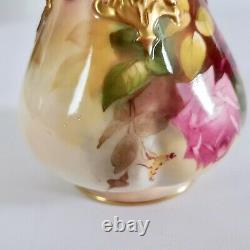 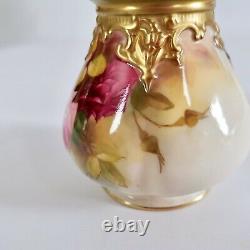 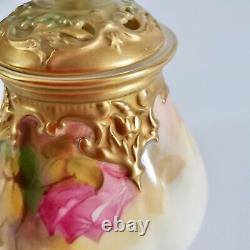 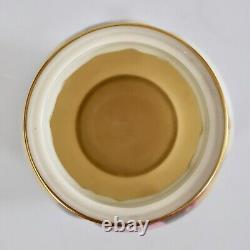 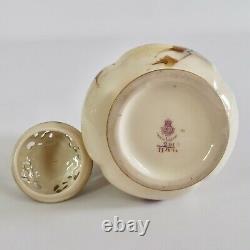 This is a very fine small potpourri vase and cover made by Royal Worcester in 1923. The potpourri has a blush ivory ground with exceptionally beautiful hand painted Hadley roses. The original Worcester factory was founded in the mid 18th Century and belongs to the group of famous pioneering potteries in Britain. It went through various changes and take overs, and in the mid 19th Century it merged with Chamberlains and Grainger, both earlier split-offs, taking the new name "Royal Worcester". The factory distinguished itself with its extremely high quality of artwork, hiring the best artists and always coming up with very vivid designs full of flowers, birds and fruits.

It was in operation until the early 21st Century but eventually succumbed to the changing times. The vase has a bulbous shape with a rich Persian-style gilt ornamental rim, the perforated cover also shaped in the Persian style with lavish gilding.

The body of the vase is beautifully decorated with abundant Hadley roses. Hadley roses received their name because they were first designed in the factory of James Hadley, who exclusively decorated porcelain for the Royal Worcester factory in the late 19th Century.

A famous painter of the "Hadley" rose was Walter Sedgley. After the demise of the Hadley factory it was subsumed by Royal Worcester, which kept the style going well into the 20th Century as it had become very popular.

This little vase is of particularly fine quality and the painted roses more abundant than usual, although it is not signed by a particular artist: you can see the softly painted roses in full bloom, some of the foliage almost transparent. The vase has the Royal Worcester mark with the year cipher for the year 1923 on the underside, and shape number 291. CONDITION REPORT Both vase and cover are in perfect antique condition without any damage, repairs or crazing and only some minimal rubbing to the gilt on the cover, as visible in the pictures.

Antique British porcelain is never perfect. Kilns were fired on coal in the 1800s, and this meant that china from that period can have some firing specks from flying particles.

British makers were also known for their experimentation, and sometimes this resulted in technically imperfect results. Due to the shrinkage in the kiln, items can have small firing lines or develop crazing over time, which should not be seen as damage but as an imperfection of the maker's recipes, probably unknown at the time of making. Items have often been used for many years and can have normal signs of wear, and gilt can have signs of slight disintegration even if never handled.

I will reflect any damage, repairs, obvious stress marks, crazing or heavy wear in the item description but some minor scratches, nicks, stains and gilt disintegration can be normal for vintage items and need to be taken into account. There is widespread confusion on the internet about the difference between chips and nicks, or hairlines and cracks. I will reflect any damage as truthfully as I can, i. A nick is a tiny bit of damage smaller than 1mm and a chip is something you can easily see with the eye; a glazing line is a break in the glazing only; hairline is extremely tight and/or superficial and not picked up by the finger; and a crack is obvious both to the eye and the finger.

Etcetera - I try to be as accurate as I can and please feel free to ask questions or request more detailed pictures! DIMENSIONS the item stands 16.5cm (6.5) tall incl.

Finial and is 11.5cm (4.5) in diameter. The item "Very fine Royal Worcester small potpourri vase, Hadley roses, 1923" is in sale since Tuesday, October 26, 2021. This item is in the category "Pottery & Glass\Decorative Pottery & Glassware\Vases".

The seller is "rattlethecups" and is located in Tenbury Wells. This item can be shipped worldwide.