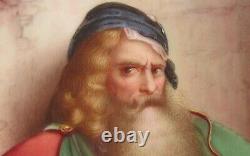 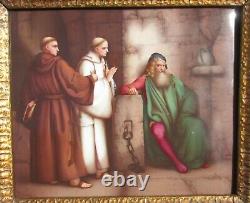 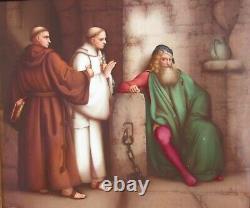 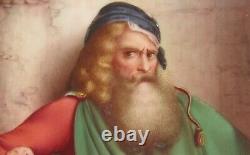 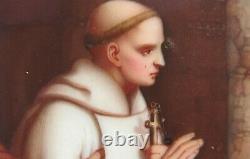 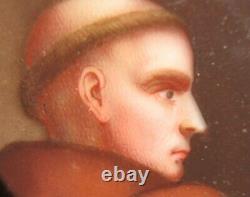 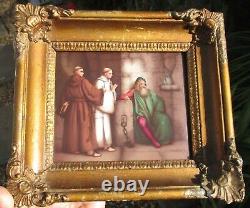 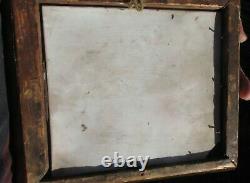 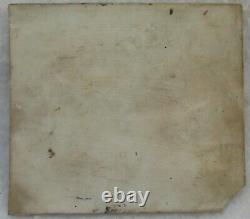 Remarkable very finely painted porcelain plaque Monks visit Columbus KPM Berlin. A remarkable very finely painted porcelain plaque with reverse impressed with eagle holding scepter - and stylised initials -'Ad' - presumably of the artist - in the bottom corner of the plaque. Painted Image is 19cm by 16.5cm. The plaque is somewhat larger as there is a white border around the image. Interestingly a piece of the plaque is broken off in the corner.

The painted image on the tile is in good condition. (If one was to re-frame it - one would also need to make a slightly irregular recess in the frame so as to avoid showing the white margin of the plaque) This really demonstrates how valuable these blank plaques were - as they were fired at a very high temperature with very pure materials and as a consequence were very costly.. KPM tiles were probably purer and suffered less breaks like this one - the break initiating at an impurity in powder of the ceramic. The very high firing temperature and lack of defects in the tile material allowed subsequent firings of a wide range of paint pigments (some colors requiring high firing temperatures) which allowed the artists to use a large range of brightly colored pigments producing the very vividly colored plaques such as this which have lasted well over 100 years without losing their vivacity or gloss. This high firing temperature and purity is what distinguishes these plaques from regular tiles and is the reason the best artists were employed.

The test of this plaque is thus that it has lasted as long as its KPM equivalent and it is for the viewer to decide on the quality of the painting - which I think in this plaque is of the very highest quality. It is going to last another 100 years and more.

More-over, if one compares it to the KPM equivalent -you will see just how good the detail is painted on this one. I have included a comparison with the original 1846 oil painting by Gustave Wappers, from which this and the KPM plaque are copied. You will also see that the present plaque is significantly different in detail to the KPM version if one compares them closely (not shown) However the style and colors are so close that this and the KPM plaque have to be painted by the same artist. Today the image is indistinguishable from a KPM plaque.

The plaque is the most finely painted I've ever seen - especially of Columbus' face and clothes - noting that a majority of KPM plaques do not show expressive faces - clearly here Columbus is not happy at being put in jail by the king - who'rewarded' him this way rather than with the deal he was supposed to get for discovering America. It is an image that echoes down the ages as Columbus never got the deal which the king offered him before he set off in search of the new world - and one might be still angry on behalf of Columbus for this betrayal.. One is supposed to note that he is not in shackles and has very fine clothing as befits his celebrity status - (the man who literally changed the world forever)..... And for this public acclaim and popularity, the king had to release him after a few weeks. I have seen a similar larger plaque with the same impressed mark (and the same art work), described as KPM, but I don't think either are KPM - without the letters accompanying the eagle.. This notwithstanding, this is undoubtedly a nineteenth century plaque; it is painted as evidenced by the fine and different sized and direction brush strokes, and the painting has exquisite detail, more-so than many KPM plaques I've seen, and shows well the anger in Columbus' frown and distorted features - such features usually - out of the comfort zone of KPM artists who more often painted comparatively expressionless, smooth (as smooth as porcelain) toned skin features. The broken plaque does not detract in any way from the painting - all of which can be seen from the front. In fact - the break is really a'badge of honor' as it testifies that this plaque was fired at a high temperature and (just) survived - (enough to paint the image on, probably by the same artist and was at the time deemed valuable enough not to be wasted). So today the image and 100 or more year old plaque is indistinguishable from a KPM plaque and the quality of the painting speaks for itself. In fact because the KPM plaque is so similar to this one one, I think it definitely must be by the same artist. The break is in fact a talking point.. I'm sure that this would have originally in the early 1900s cost the same retail as a KPM plaque as when framed it would have been indistinguishable.

This item is in the category "Pottery, Porcelain & Glass\Porcelain/China\KPM". The seller is "greenergates" and is located in Stockport. This item can be shipped to North, South, or Latin America, all countries in Europe, all countries in continental Asia, Australia.